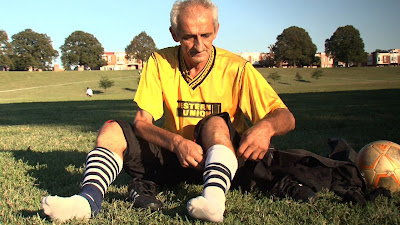 For five years, filmmaker Mauricio Osorio documented the stories of immigrants and refugees from around the world as they shared the fields in Patterson Park, playing soccer every weekend! Originally from Colombia, Osorio presents the feature length documentary Feb 4th! Burundian singer and Baltimore refugee, Didi B opens the evening. Q&A in English and Spanish follows w/ Osorio, and featured refugees D’juro Jovetic and David Mbeya originally from Croatia and Burundi share their emigration stories. $10, $5 mbrs, stus. 8pm.

About the filmmaker: Mauricio Osorio
Mauricio is a self-made filmmaker. He originally moved from Colombia to Baltimore in 1999, but his journey really began when he rented a house in Little Italy in 2002 and in 2003 started playing soccer in the fields of Patterson Park and came to meet other foreigners. He quotes the protagonist D’Juro Jovetic, “’Language is not a problem for soccer,’ meaning that you don’t need to know English to understand culture.”

According to Osorio about Patterson Park, “Immigrants and refugees have been congregating there every Saturday for over 10 years!” Osorio found common ground as he played with other immigrants and was able to access their lives outside of the field. In 2004, Mauricio participated in a documentary class at the Creative Alliance. He had no idea what topic to focus on when he met Paul Santomenna, founder of the Megaphone Project, who was teaching the class and explained that “The average documentary takes 7 years to do.” Without any equipment of his own, Osorio committed to sharing the stories he would follow for over five years.

“This experience isn’t exclusive to Patterson Park, but occurring all across the United States, wherever there are immigrants, because soccer is more than a sport,” says Osorio.