Meatcutter’s Daughter: Lynda Barry as Inspirational Speaker in the Land of Crusty Leggos

Lynda Barry started out her talk in an offbeat way: she sang. The song sounded familiar but had a Barry-esque twist. It was a retooled version of Loretta Lynne’s ‘Coal Miner’s Daughter’ retitled ‘Meat Cutter’s Daughter.’ Barry explained that speaking in front of crowds made her nervous as hell and sweaty and that singing was just about the most embarrassing thing she could think of, and this is how she gets all her nervousness out of the way.

After a round of applause and laughter for her tabloid-worthy rendition, she asked the crowd to consider “What is an Image?” The idea of the image is central in her ‘Writing the Unthinkable’ inspirational talk, designed to help would-be artists and writers get cooking, presented last week at Johns Hopkins University.

“An image is what is contained by play and it feels real. Despite your better judgment, an image feels alive.” Barry illustrated her point, rather than explaining it – asking the audience to recite aloud their first phone number. We did it all at once, loudly and excitedly. According to Barry, after saying our first and beloved phone number we all crinkled up our noses, shrugged our shoulders, and smiled sheepishly, embarrassed by the pleasure of vivid remembering. Lynda Barry: “My mind’s got a mind of its own.”

“Everybody ALWAYS does that! THAT is an image!” she declared. To further illustrate, Barry asked the group to recite our third from most recent phone number, which very few people could do. Those that could, mumbled it but nobody looked excited about it. “That is NOT an image,” Barry intoned.

“An image is a container for a specific idea, memory, or experience – it has to do with our well being,” Barry continued. “It’s like reading a good book that feels like a real world, or having an imaginary friend.”

Why was Barry talking about images? This idea is central to her creative process and her newest book, “What It Is.” The accompanying talk outlined and illustrated several of the main ideas in the book, which is a combination of hand-written text, drawing, collage, and attempts to unlock the creative soul in any wannabe artist. Lynda Barry talked about the spontaneous image present in her first novel: “I wrote it in TEN DAYS!” she exclaimed. “After I finished it I was like, DAMN, there’s going to be novels all over the house and what am I going to do with them?” Barry decided that she had written her first novel incorrectly and then spent the next ten years writing her second novel “the right way.” She had somehow lost her grasp on “The Image” for those ten years. Her second novel wasn’t inspired – it was work. It was intentionally uplifting, written to help others. She figured out the plot and characters before she started writing it. Barry says the main problem with the second novel was the computer: “There’s a delete button!” Nothing was ever good enough and this novel was never finished, despite her labor.

Finally, she asked herself, “If it was ME writing this novel, or me as a five-year-old kid, how would I do it?” To me, this is a great question for any blocked artist to ask themselves: How would I make this ________ (painting, video, collage, whatever), if I were a kid? What would I NOT be afraid to do?

Barry decided that the computer as a tool was too fast ( “computer… delete… I suck… delete…” ), and chose to write a third novel with the slowest medium possible – a brush and paper. Nine months later, the novel ‘Cruddy’ was finished. This novel was everything the failed one was not. It had no moral purpose. It didn’t follow a traditional plot. It didn’t follow any RULES for successful novels. It was decidedly NOT uplifting, full of blood, guts, murder, and gore. Most of all, this book is mischievous and dark. “What year is your imagination?”

As creative adults, especially those of us who have come to the arts later, rather than sooner, we feel ashamed that we’ve started too late and we need to immediately make up for lost time. We need to paint a masterpiece ASAP to prove that we are doing what we’re supposed to. There’s no time for play. We’ve got do get it RIGHT. It’s achievement time. In this situation, the artist second-guesses herself out of creating anything.

“If you could have any kind of tail, what kind would you like?”

According to Barry, art is the “vestigial tail” of the grownup. The only playtime adults allow themselves is doodling while talking on the phone, playing air guitar, drunken dancing or singing, and/or her least favorite: exercise. As psychologists have established, play is necessary for mental health and growth. What is, for children, deep play is, for adults, creative concentration. This type of brain activity is essential for creating art, but adult creative types have a difficult time permitting it.

“Why DO little kid’s drawings ALWAYS look so damn good?” Barry asked the crowd. “Why do babies dancing always look so COOL? They’re always in the groove. How do they do it?” Barry described the drawings her brother made when he was in elementary school and the “cereal trance” in which he observed them. He’d draw war drawings and then set them up on the kitchen table. He’d stare at them intently while he ate his cereal. In that magic state where a cereal box becomes the most interesting thing EVER to read, but only for the duration of one bowl of cereal, her brother scrutinized and analyzed his drawings. Then, as soon as the last drop of milk was gone, out came the red pen! Blam! He blew up all his army men in great explosions, and with sound effects! After the war was over, the drawings were left behind, no longer important, discarded. When creating, we need to remind ourselves it is the ACT that is magical and important, not the product. An adult in this same situation would freak out: “What do I DO with this now?”

According to Barry, most artists think we need to have an experience in order to make art, but this is backwards. Making art IS the experience and the product is nothing more than the evidence. Barry currently advises writing students in Wisconsin and, when faced with the problem of CONTENT, shrugs it off: “Good luck keeping content OUT” she says. 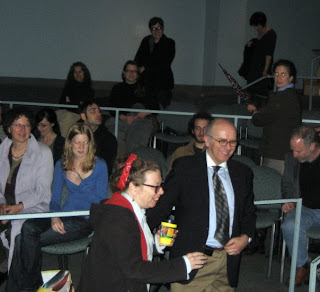 On the subject of writers workshops, Barry says, “I wish we could STOP editing. Editing is unproductive. It is what we are doing when we see someone in tight pants and think, If I had that ass I wouldn’t wear those pants.” Editing is negative, on the whole. Editing also is what we do when we replay awkward moments in our life, over and over in our heads, except THIS time we actually have a comeback for a rude comment. Editing makes us feel better, but it doesn’t put words on a page or paint on a canvas. It just makes us neurotic.

Barry advises that the correct mindset for using images is the same state of mind for listening to a joke that bends the limits of reality. If you want to enjoy the joke, you have to suspend rational doubt and immerse yourself in anticipation. After a joke is told, it doesn’t belong to you – you’re supposed to share it and pass it on. 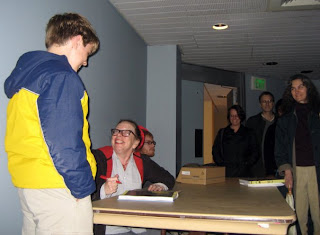 At this point in the talk, Lynda Barry apologized for going on too long and decided to scrap the slide portion of her talk and the audience FREAKED OUT. Noooooo! Everyone shouted: Show Us Your Slides! “Hell YEAH! I’ll do it,” Barry responded.

Barry showed slides and images from her new book, “What It Is,” which was SOLD OUT by the time I got near the front of the book-signing line so I didn’t get one. (I am told that Atomic Books has them in stock. Not SIGNED ones! Dammit.)

“An image is a formless thing which gives things form. An image is what we want back when someone we love dies – the little everyday things that surprise and delight us, that inundate us, frustrate us, and make us laugh and cry.”

Barry concluded her lecture by sharing an image for a book cover she was invited to create for Penguin Press. The publisher was re-releasing a series of classics with artsy new covers and Barry was asked to do the cover for Louisa May Alcott’s “Little Women” – probably because, as she noted, “I am a cartoonist and I am a girl.” After she worked on the image and submitted it, as requested, it was rejected by Penguin because it “didn’t look Lynda Barry enough.” WTF? She didn’t know whether to laugh or cry. “There has to be more,” she said, “than feeling fantastic because we do something good or feeling terrible because we eff’d up.” Regardless of success, criticism, competition, and failure, the creative process and the image are there for us, if we can be open to it with humility, humor, and gusto.

Barry ended her lecture the same way she started it: singing. This time she was all warmed up, so she shared her best party trick: She can SING “You are my Sunshine” somehow without opening her mouth. It sounded like a little troll was stuck inside her mouth, singing his little heart out. It was pretty intense, a little bit creepy, and totally hilarious. The crowd loved it. Then everyone immediately ran to the book buying and signing table and bought all the books. And I didn’t get one and I am pissed. Did I mention that already?